Our World From The ISS 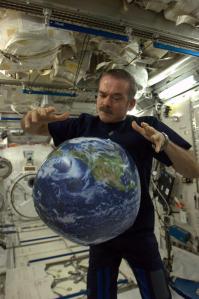 I first heard about Commander Chris Hadfield back in January, and have been following him and his exploits on Twitter since. I think what he’s become most famous for (apart from being perhaps the greatest guy in the Universe) are his photographs of Earth, space, and the ISS.

Over at Our World From The ISS, people have collected all of the photographs he’s tweeted about Earth, and placed them on a map. This way, you can see all the photos and read what Chris Hadfield said about them. There’s also photos from some of the other astronauts aboard the ISS as well.

I’m hoping Chris Hadfield will continue to share photos of the Earth once he’s living back here again. He has stated he has 1000s of photos still to show, which is a good sign.

So, join me in wishing our overlord Commander Chris Hadfield (pictured above mastering the Earth) a safe trip home. #ThankYouCommanderHadfield. Onwards!

2 Responses to Our World From The ISS