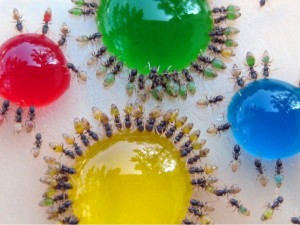 It’s Thursday, so it’s time for another Throwback! First up are some translucent ants eating a coloured liquid, colouring themselves in the process (Colossal). It looks pretty cool, especially the ants that create new colours by sampling several of the different liquids.

From tiny ants to tinier objects. Over at The Telegraph, they have a selection of photographs of everyday objects magnified a million times, and they look pretty awesome. These range from a used dental floss to mascara brushes to salt and pepper, and other random objects. New Scientist also has a collection of images from the 2011 visualisation challenge, and they are rather cool too. For a more unaltered image, you can see an image of skin cells under the microscope, in all their complex glory (io9). It’s a hidden world down there.

From ants and the microscopic world, to a Terminator-style digital future. Back in 2011, new breakthroughs were being made in wearable bionic contact lenses which would project information directly across your field of vision (BBC, IOP Blog). These haven’t come to fruition (yet!), but it’s getting closer every year.

Finally, something not related to coloured ants, magnified objects, or bionic lenses, but it does involve ninjas. That’s right, it’s the physics of the ninja warrior salmon ladder!  What they do is rather mental, but then again, it’s not called a ninja warrior salmon ladder for nothing! What’s cooler than doing the actual feat though is working out the physics behind it, which is precisely what Wired did. They figured out how much power you would need to overcome this obstacle. The answer? Lots. There are graphs and equations to back everything up, and it’s great.